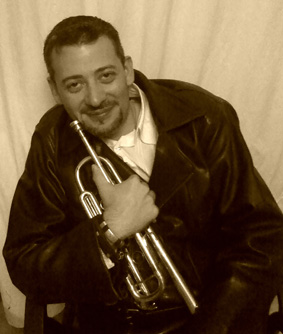 Rafaël Macaluso was born in Liège, on 4 December 1979. As a three-year-old, he starts his musical studies under the wings of his father Rosario Macaluso (international soloist – Cornet solo at the Théâtre Royal de la Monnaie – teacher at the Conservatoire Royal of Liège). In 1987, at the age of 7, he makes his debut as a piccolo player at the stage of the Téâtre Royal de la Monnaie in the opera 'Jenufa' by Janacek, conducted by Sylvain Cambreling. From that point, he realises that music and playing trumpet will be the guide-line through his life. During his studies he performs regularly as a soloist in chamber music, in symphony orchestra's and opera. When he's 17 years old, he gets the opportunity, to record a cd with Lola Bobesco (violinist with an international reputation – in 1937 finalist in the Competition Eugène Ysaye, afterwards Competition Queen Elisabeth). Gradually he gets a taste for music education and after secondary school he enters the trumpet class of his father at the Royal Conservatoire of Liège. At the end of the first year he immediately obtains the first prize trumpet with great distinction, the first prize for chamber music and the first prize for solfège. During his studies he gets to know many famous trumpet players/teachers such as Manu Mellaerts (International soloist – trumpet solo at Théâtre Royal de la Monnaie and teacher at the Conservatoire Royal of Brussels), Pierre Thibaud (International soloist – professor of honour at the Conservatoire National Supérieur of Paris), Jérôme Callet (New York), Bob Case (studio musician – New York). In 2002 he is engaged by the Royal Band of the Belgian Air force, conducted by Commander Conductor Alain Crepin, presently conducted by Captain Conductor Matty Cilissen. At the same time he gets the function of assistant in the trumpet class at the Royal Conservatoire of Liège, a job he still exercises. He often performs as a soloist in Belgium as well as abroad. The concert band 'Nidrum' is also conducted by Rafaël Macaluso.