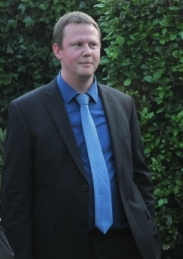 Wouter Simoens, born in 1980 in Kortrijk, Belgium, first started studying music at the age of 9 at the academy of arts, Wakken. Three years later he was taking piano lessons at the Waregem academy of arts with Bernard Baert. At 14 he studied piano at the school of arts of the Lemmens institute, Leuven with Paule Van Parys and later, at 18, with the Hungarian pianist Levente Kende, also attending masterclasses at Noth, France. He subsequently studied piano and composition at the Royal Conservatory, Ghent, with composer Frank Nuyts. Currently Wouter teaches piano and composes for a wide variety of ensembles and genres, including music for films.
With his perfect pitch, at an early age, 11, Wouter started writing small compositions for solo piano, chamber groups and even orchestras, in the style of Mozart, who was the first classical composer with whose works he became familiar. As he gradually moved towards a mature style his composition moved more towards the romantic.
To date, Wouter has won three prizes:
Winner of Jong Tenuto 1997 with his own work 'Mors Janua Vitae', for piano.
A prize at the 'August De Boeck' composition competition in 1998 with the piano work 'Raptus'.
Winner of the 'Together for Peace' music competition in 2009 with the piano work 'Nocturne'.
He has received commissions to work for the VRT, and was also asked to compose the music for a documentary on Flemish painter Roger Raveel.
His major work 'Cassiopeia', for large wind band and mixed choir, is currently being performed at Tienen in Belgium and Stordal in Norway.

"...For me, creating a composition is a quest for the intuitive ordering of sounds which trigger a specific and subtle atmosphere. The atmosphere that is created this way is important, because it is the pathway to ecstasy. Music is something intangible, yet it touches us and brings us to rapture. It is a journey that everyone experiences differently. Music is a universal language that can penetrate deep into your soul..."
Visit my personal site: www.woutersimoens.com to hear a variety of my compositions.