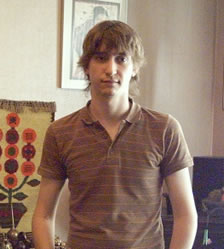 Stijn Arnauts was born in Mechelen on 15 August 1985. Since 2003 he studied music pedagogy at the Lemmens Institute in Leuven. He received his first prize note teaching in 2005 and his first prize harmony in 2006.

Already since a very young age he composed and improvised on the piano. From 2000 to 2003 he was teaching accompaniment and improvisation with Bert van Herck in urban music conservatory in Mechelen. In the Lemmens Institute, he took extra lessons in composition with Luc van Hove.

As a composer he wrote mostly for piano. He writes in a romantic style with great attention to the tonal melody, and the influence of folk and film music. In the short period between 2003 and 2005 he wrote between his studies by more than one hundred short works, which are now fifteen were selected for publication by Golden River Music.