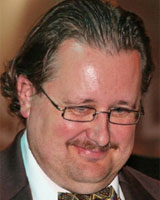 Peter Lejaeghere was born in Roeselare in1967. He took his first music lessons at the Music Academies of Izegem and Roeselare, where he obtains qualifications for trumpet, piano and music theory. He the becomes laureate of the national music competition ‘Pro Civitate’

At the Royal Conservatory of Ghent, he obtains prizes for music theory, trumpet, chamber music, harmony, counterpoint and fugue, as well as the higher diploma Trumpet with distinction.

Peter Lejaeghere appeared at home and abroad with various ensembles such as the ‘Brussels Trumpet Choir’ and the ‘European Brass Quintet’, in countries such as Germany, the Netherlands, USA, Spain and Malta. As a soloist, he worked with the ‘Collegium Instrumentale Brugense’, led by Patrick Peire and the chamber orchestra ‘Oratorio’. He is also co-founder and member of the ‘Flanders Trumpet Quartet’, a young and dynamic ensemble that wants to further the trumpet in a better light.

Lejaeghere became in 1987 conductor of the ‘Royal Pius Choir’ from Ardooie, for which he has already realized several successful choral moments. Since May 1997 he also conducts the ‘Royal concert Band St. Cecilia’ from Ardooie. He also works as a teacher in Music Academies in Izegem, Roeselare and Gent-Ledeberg.