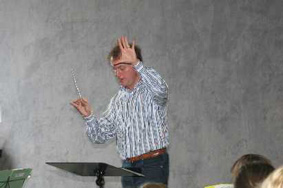 Tony Osaer studied at the Royal Conservatory in Brussels and won first prizes in music theory, harmony, guitar (in the class of Albert Sundermann), counterpoint (class of Rafael D’Haene) and wind band conducting with Jan Segers and Norbert Nozy. He studied also chamber music with Marcel Lequeux at the Royal Conservatory in Ghent and obtained a first prize in 1994. His studies were completed at the Lemmens Institute in Leuven and there he obtained his master in music.

Then he participated in masterclasses with internationally renowned guitarists such as Yoshinobu Iwanaga in Florenville, Hubert Käppel, Robert Aussel, Gordon Crosskey, Costas Cotsiolis and L. Szandrey in Budapest.

For conducting, he studied with Ed Spanjaard and Jac van Steen in Den Haag, as well as with James Gourlay in Kerkrade. Afterwards he started working for the Newport Concert Band, the Constant Moreau Circle in Veurne and led also the brass bands in Lichtervelde and Sint-Eloois-Winkel.

He was a guitar teacher at the Conservatoire in Ostend from 1998 to 2004. Since 1991 he teaches guitar at the Municipal Music Conservatory of Bruges. Together with Conny Clement he forms the duo Veludo.

He composed repertoire for wind and brass bands, as well as concert pieces for ‘his’ instrument – the guitar. Also various arrangements of pop and classical music for brass bands are written by him.