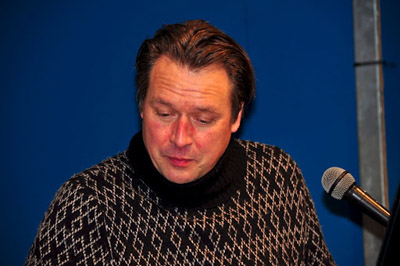 Johan Bouttery was born in the early sixties in Ypres. At the academy of his native town he attended courses flute and percussion. From 1980 he studied at the Royal Conservatory of Brussels where he obtained a first prize for music theory and percussion.

After graduating he worked in his education, but for many years his musical career stood on the back burner because he had accepted a job as head animation at a holiday park chain. In this capacity he remained much in tune with the current, mostly lighter music happenings. During this period he wrote "he "Samson Rock", which in Belgium is known by the young and the old as the anthem of the popular 'Samson and Gert show' on Belgian television.

In 1996 he took up the thread again and he became a music teacher at the conservatory of Ostend, where he taught music theory and percussion. Besides his songs in pop and rock circles, he wrote "The smell of spring". This consists in an edition for flute, sax or clarinet, each with piano.

Together with his wife Frieda Slembrouck he wrote a song bundle "Toemaatjes". This collection is intended for pupils in primary education or singing classes at music schools.