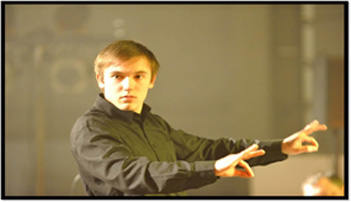 When he was 8 years old, Tom Hondeghem, born in Ypres on 22 December 1992, began his musical education at the Academy for Music, Word and Dance of Diksmuide. At the same academy, he started to take piano lessons from Marie-Claire Deleersnyder. He joined the local youth choir Sint Bavo in Merkem, where he participated in several musicals. He was also organist in Merkem and Elverdinge and played in several concert bands.
At the age of 16, Tom decided to study the saxophone with Rik Vaneyghen. After only two years, he took his degree with the highest distinction for saxophone and ensemble (sax quartet), high distinction for piano and the theory of harmony en he also obtained the prize for 'Most Valuable Student of the Academy'.
In the meantime Tom graduated from high school in Ypres, where he studied sciences and modern languages. In 2010 he passed the entrance examination at the Royal Conservatory of Ghent.
Tom likes to present himself as a saxophone player, a pedagogue, conductor and composer.
At this moment, Tom studies the saxophone with Raf Minten, Koen Maas and Rik Vaneyghen. He also takes lessons with Rudy Haemers, Nadine Bal en Koen Dries. Besides his studies, Tom is also active as a soprano-, alto- and tenor saxophonist with the concert band 'Ypriana', the concert band 'De Jongelingskring' Torhout and the concert band Sint-Cecilia Merkem, where he functioned as 2nd conductor from 2008 till 2011. He regularly works as a freelance musician and he is a soprano and alto saxophonist with the sax quartet Saxilicious, which accompanies receptions and concerts.
Tom has frequently worked as an interim teacher and choir conductor at the academies of Ypres, Diksmuide, Torhout en Gentbrugge.
In 2011 Tom started with a course for future conductors at the academy 'De Kunstbrug' te Gentbrugge with Nico Logghe and Dimitri Bracke. Wim Belaen was also his teacher for that subject at the conservatory. Since August 2012, Tom Van Hondeghem is the conductor of l'Harmonie Démocratique 'La Mouscronnoise' in Mouscron (first section) and since October 2012, Tom is the conductor 'ad interim' of the 'Houtlands Youth Ensemble' in Torhout.