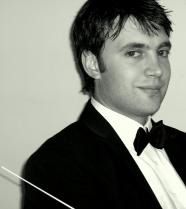 He now studies conducting at the Royal Conservatoire in The Hague with Jac van Steen, Kenneth Montgomery and Alex Shillings. He prticipated in master classes with Jorma Panula, Bastiaan Blomhert, Ivo Venkov and Otto Tausk. Karel was appointed as conductor of the Orchest Vereeniging Dordrecht in 2009, and as artistic leader of Continuo Rotterdam.

He is invited on a regular basis as assistant-conductor to conduct preparatory reahearsals at Codarts, Hogeschool der Kunsten in Rotterdam. In 2011 he assisted Reinbert de leeuw in the production of Schönberg’s Gurrelieder. In September 2011, during the celebration weekend 25 jaar Muziektheater Nederland, he conducted a contemporary setting of Monteverdi’s L’incoronazione di Poppea. Karel Deseure was chosen to conduct the ASKO/ Schönberg Ensemble’s Ligeti Academy during the 2011-2012 season.

In March 2012 he won the second prize and the audience prize at the "Concours International de Direction d'Orchestre Paris-Ville d'Avray".