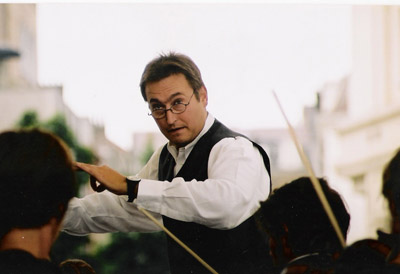 Wim Belaen was born in Izegem and studied clarinet, chamber music and wind band conducting at the Conservatory of Ghent.

As a clarinet player, he worked freelance with the Flemish Opera in Ghent and Antwerp, the Belgian Radio and Television Orchestra, the New Flemish Symohony Orchestra, The National Opera and the Collegium Instrumental Brugense. There he worked with conductors such as Sylvain Cambrelain, Robert Groslot, Sylveer Vandenbroeck, Laszlo heltay, Dirk Brossé, Patrick peire and many others.

Later on he built himself a full career with conducting. He conducts as well the Ghent Academy Orchestra (symphony orchestra) as different concert bands such as the Royal Band ‘Vrank and Free’ of Nazareth, which he led to superior categroy. He also guest conducted the ‘Zeeland Symphony Orchestra’ at Middelburg (the Netherlands) and the ‘Orchestra Nacional do Porto’ (Portugal) and worked also as an orchestra consultant.

In January 2005, Wim Belaen became director of the renowned Academy of Music, Drama and Dance ‘Emiel Hullebroeck’ at Gentburgge. This school belongs with its 1900 students to the larger art academies in Flanders.

Finally Wim Belaen is also teacher at the Conservatory of Ghent. He teaches there ‘Introduction to orchestral conducting’ and is also the assistant conductor of Dirk Brossé, both for productions of the symphony orchestra, the string orchestra as well as the concert band.