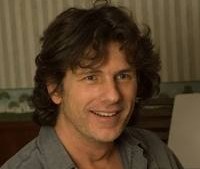 Brian was born in Antwerp, Belgium on March 22nd, 1962, carrying the name Dirk Thyssens. He was later adopted by Stan Pilaet, a once 4 time heavy-weight boxing champion who boxed under the name of Stan "Clifton". He thought that picking up the name Clifton would be a good way to start. And so the name Brian Clifton was born.

Brian made his first professional moves not towards the Belgian Radio & Television in Brussels, but towards London. There his contact with legendary oscar-winning film producer David Puttnam (Midnight Express, Chariots Of Fire, The Killing Fields) would eventually lead him to the next important step in his career: Los Angeles. But first, Puttnam gave Brian (and his then partner/arranger Steve Willaert) the unique opportunity to write the music for 'The Mission'. He was to collaborate with Beatles producer/arranger George Martin as conductor. As fate would have it, an unstable financial situation over at the production company Goldcrest necessitated The Mission's scoring to be done by a well-known and much more experienced film composer. And so they went for Brian's mentor: maestro Ennio Morricone. Nevertheless, the whole Mission experience together with Puttnam’s encouragement (as Columbia Pictures' CEO) gave Brian the self-confidence he needed to defenitely pursue a career as a film score composer. After the premiere of his first feature film soundtrack, 'The Colleagues: A Three-Day Weekend', Brian moved his family and studio to Los Angeles.Nevertheless, starting out in Los Angeles wasn't easy. By focussing on nothing else but writing music to picture, Brian learned how to "write music for a movie" instead of "composing film music", a mistake often made by inexperienced film composers, he says. Eleven years of working in Los Angeles taught him that.

Brian was put in touch with successful children's author Marc de Bel by his friend and 'Blinker''s producer Rudi van den Bossche. Marc and Brian immediately hit it off as collaborators on how to make Marc's stories, rich with fantasy, work with Brian's dramatic and evocative style of composing. The musical fairy-tale 'Malus', performed by the world famous Flanders Recorder Quartet, directed by Lulu Aertgeerts, was the first successful result of their partnership. Through Lulu Aertgeerts -as author and director- Brian was introduced to world of theater and musicals.  Here, too, his talent and experience in writing drama music served its purpose.